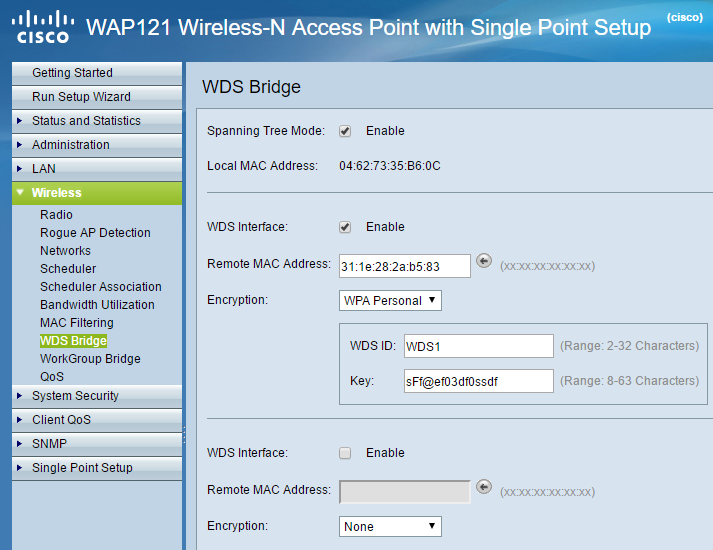 I recently had a small job to configure few Cisco WAP121 wireless access points for a client to be used as Wi-Fi extenders. On WAP121 this can be done in two ways - "WDS Bridge" and "WorkGroup Bridge".

WorkGroup Bridge is more or less standard Wi-Fi Repeating mode that is widely available on many routers and access points. It works on layer 3 and connects to a host WiFi access point using SSID and password as any other client. This allows to configure WiFi extenders without having admin access to the host router.

WDS Bridge is less common and less standardised mode that works on level 2. Both host and client access points need to be configured by entering each other's MAC addresses and optional security details. Because of lack of standards I wouldn't suggest using WDS on access points from different manufacturers. This method doesn't use SSIDs at all so they can be configured independently from WDS setup.

Cisco recommends using WDS when possible. I did some testing using both modes between Cisco WAP121 APs myself and came to the same conclusion. Transfer speeds in majority of test were much better over WDS (see screenshot below). There were few occasions when speeds were more or less identical, but level 3 repeating mode never performed better than level 2 WDS bridging. 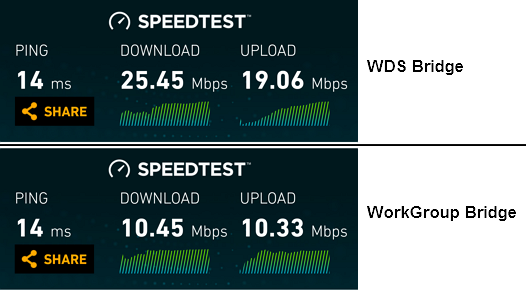