This was a clear false positive and Sophos promptly issued a fix in detection updates released 19 Sep 21:32. Unfortunately most of the affected systems were not able to automatically download definition updates anymore...

False-positive seem to have affected various auto-update packages, including Adobe Reader, Foxit Reader and last but not least Sophos auto-update itself! Quarantined or even deleted auto-update files crippled Sophos antivirus and it was no longer able to auto-update or even properly run. 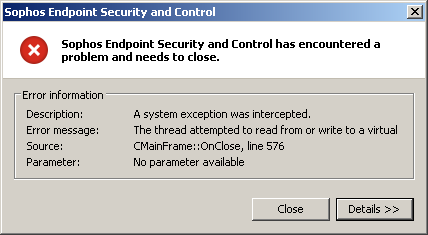 This re-installs Sophos on client machines with latest definition updates and replaces all missing or damaged files.

There were couple of machines which couldn't be re-protected via Sophos Control Centre.
Manual uninstall was failing while trying to remove Sophos AutoUpdate:

A few other machines developed another issue. They were re-protected successfully, however Control Centre started logging following errors:

This error is related to Sophos Web Intelligence service. This seems to be caused by some Web Intelligence files missing due to the false positive. Re-deploying Sophos via Sophos Control Centre doesn't seem to replace the files. As a test you can disable Web Scanning in Sophos Control Centre scanning options and after clients receive new policy the error should go away.

This one was resolved by one of the following methods:

# Liz 2014-06-03 06:51
Windows Installer Cleanup utility worked perfectly. Thanks for stopping me from bashing my head against the keyboard!