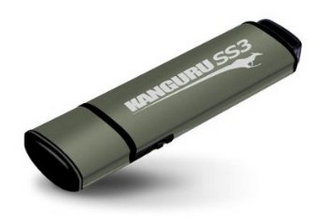 I have an old trusted no-brand 4GB USB Flash drive with hardware write protection switch that use to load various security and other tools to infected, or simply untrusted PCs. Hardware write-protection removes that constant need to remember to reformat the flash drive after every use with untrusted devices.

While 4GB is not much, it is more than sufficient for this particular purpose. However, recently I started noticing that write speeds on this thing are getting more and more sluggish. A quick test with AS SSD revealed that it wasn't just my imagination - an average write rate was just over 2MB/s. I don't remember this drive being so slow, so it's probably an aging flash memory issue.

So, it's time to a replacement. Unfortunately, that's more easily said than done. A quick trip to Curries and Maplins was in vain - no USB devices with write protection were available. A sales advisor at Maplins suggested using an SD card with SD to USB adapter, which seems like a reasonable workaround, but I believe that write protection switches on SD cards are not hardware/firmware based. They simply instruct the Operating System to treat the device read-only, but in no way can enforce it.

I then turned my attention to online stores, including eBay and Amazon. Most of the USB flash drives with write protection I found were very small capacity, ancient USB 2.0 drives with ridiculously expensive price tags. I doubt they would be much faster than the one I was trying to replace...

Eventually I came across Kanguru SS3 USB 3.0 drive that actually advertises hardware write protection as a major feature. In the US, the 16GB version can be bought for around $40. In the UK, the cheapest was Amazonco.co.uk with £37. That's quite expensive for a 16GB flash drive, but it's not completely unreasonable providing the drive is well built and has good read/write rates. The manufacturer advertises maximum read/write speeds as 230MB/sec and 170MB/sec respectively. I obviously don't expect real-world data transfer rates to be anywhere near that.

The order is placed and I will update this article once I receive and test this little drive.