Installing MAC OS X 10.9 Maverick on a PC for triple boot with Windows

I will be using TonyMACx86 method.

Occasionally after boot, Microsoft wired USB mouse wold not work. Unplugging and plugging into another USB port sometimes fixes the issue, but not always.

After more testing it appeared that it was an issue with the mouse. Although it was always working in Windows, it would occasionally not work in UEFI BIOS. Replacing the mouse fixed the issue.

WOL does not work when MAC is sleep mode or when PC was shut down form MAC OS (works fine in Windows).

This issue was caused by CH-528T media dashboard. Specifically by its memory card reader. Resolved by making following change in BIOS: 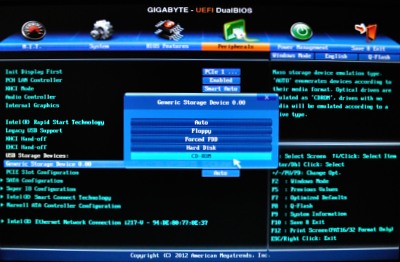 Occasionally, after resuming from sleep, MAC OS displays scrambled desktop image and hangs. This seems to be related to Asus Nvidia GeForce GTX 660TI video card. None of the normally recommended fixes I tried worked. For now I'll have to do without sleep mode.

No thoughts on “Installing MAC OS X 10.9 Maverick on a PC for triple boot with Windows”