No Signal
HDMI3
(1) Check the cable connections and the settings of your source device.
(2) Press Source on your remote control to select the connected source device.

The issue was caused by the Samsung TV feature called Anynet+ (HDMI-CEC). This feature allows controlling a device connected via HDMI (in this case Google TV Chromecast) using a TV remote. HDMI-CEC is an industry-standard name (Consumer Electronics Control), and Anytime+ is a Samsung's trade name for the same feature. If you control Google TV only using its own remote, you can simply turn this feature off completely. In my case, I wanted to retain an option to use Samsung TV remote, and I found that disabling an Anynet+ option called "Auto Turn Off" fixes the issue while still allowing to control of Google TV with Samsung's remote. By the way, I tested Google TV Chromecast power consumption using a plug-in power meter and disabling/enabling "Auto Turn Off" did not make any discernable difference in power consumption (which stayed around 1-2W) 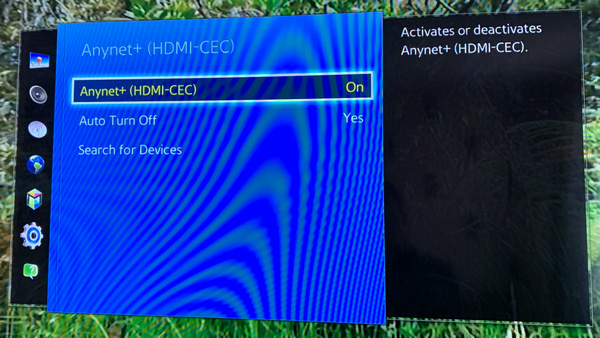