Error opening .tar archive - There are data after end of archive. 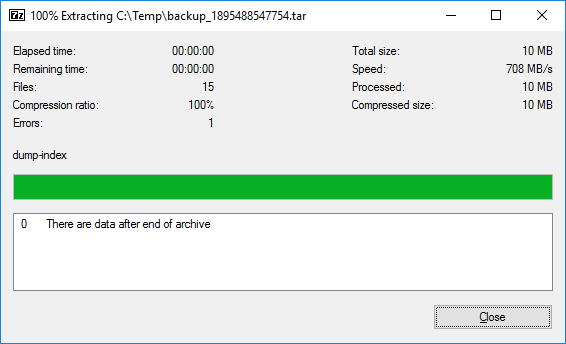 Error extracting .tar archive - There are data after end of archive

Despite the errors 7-ZIP can open and extract these files with no issues. I also compared all extracted files with Beyond Compare to the originals and they all were binary identical. It seems that the issue is caused by web server tar compression utility adding some junk data at the very end of tar archives which makes files slightly bigger than 7-ZIP expects and hence the above warnings. I tried few other Windows and Linux archiving utilities and they didn't produce any errors or warning opening the same files. This doesn't mean 7-ZIP warnings are incorrect, it looks like other utilities simply don't perform this type of checks or simply ignores them...

Update (Feb 2017): The latest version of 7-ZIP (v16.04) has re-classified this error as a warning, which makes more sense. There are no more pop-up error message when trying to open these files. When extracting affected .tar file you will now see warning "There are some data after the end of the payload data".

Warnings: There are some data after the end of the payload data.